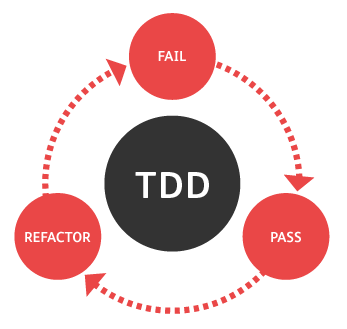 Sure, test-driven UI development is technically possible, but TDD isn’t exactly ideal for situations requiring full functional tests, and full functional tests are indispensable to GUI testing. For this reason, using TDD for UI borders on overengineering. Choose this path, and you’ll end up working with mock objects or project object models (POM), adding new layers of complexity to your project. And in many cases, you won’t be able to tell if doing this will pay off.

Besides, the way automated GUI testing is done for real-life websites and web apps poses another problem. In real life, user interfaces — and web UIs in particular — undergo a lot of tweaking. No matter how well-specked your UI is, once you do a UI prototype and play around with it, changes are always coming.

So how do people automate UI testing in a TDD project?

The short answer is they don’t.

What they do instead is clearly separate concerns between the interface and the underlying logic with MVC, MVP, MVVM, or similar architectural patterns. Basically, the main idea here is to keep the UI logic minimal so it’s mostly a view layer invoking services. This way, most projects can minimize the need of testing on the UI layer.

Most companies using this approach will plan to run automated GUI testing once the UI is stable. But in many real-life cases, companies never automate their UI tests at all and fall back on manual testing. This happens due to several reasons:

Given the factors stated above, manual UI testing might seem like a reasonable option to many. However, we all know that manual testing is a painful road that dead-ends into a dark cave. So if you can’t really do effective TDD for UI, what can you do? If you do commit to automating UI testing, the traditional choices are low-level frameworks like Selenium or complex solutions like QTP. Neither one ensures good ROI, both require development skills, and the more tests you write, the bigger is the maintenance pain. Hardly an alternative for the awesomeness of TDD.

In the end, most companies will keep a small number of automated smoke tests, fall back on manual tests, and pray that their developers are writing bug-free code. Oh yeah, and there’s always the shameful option of letting users report bugs and fixing them…

But wait! It’s not hopeless. There are new platforms coming out that challenge the status quo and promise pain-free automated GUI testing. To deliver on this promise, these new platforms need to succeed where currently-used QA automation solutions have failed. In particular, they need to focus on these three challenges:

Screenster is a QA automation tool that has been specifically built for testing web GUIs. This test application offers a new take on visual regression testing by capturing the visual baseline, along with the DOM baseline of a UI. Whenever you introduce a change, Screenster will compare the new UI version to these baselines and detect regressions. Thanks to its visual baselines and pixel-perfect comparison algorithms, Screenster is the weapon of choice when it comes to automated GUI testing. Instead of targeting individual UI components, the platform tests user experience scenarios and scans the whole structure of a UI, along with its styles (i.e. CSS) and behaviour. It stores the tests created during the recording process as sets of editable steps and reruns them during regression testing.

If a particular change is intended, you can add it to the baseline. If some parts of your UI have dynamic content, you can ignore these regions and exclude them from comparison.

Screenster facilitates QA automation by enabling both technical and non-technical people to create UI tests. It provides a UI-based management of the test script which doesn’t require coding, and that saves a ton of time and effort.

Creating new Screenster tests is a matter of minutes and once you try it, you’ll never want to go back to hand-coding. Just record a series of actions required to test the functionality of the UI, and the platform will do everything else for you. Test maintenance is pain-free thanks to magic like smart selectors and auto-healing tests.

Sounds too good to be true? Try it yourself and see if it’ll live up to your expectations.

In the brave new world of today, the quality of your UI determines the success of your application. If your UI is broken, users will leave. For this reason, thorough UI testing is crucial for 99.99% of software projects. And in many cases, automation of user interface testing is the only rational choice.

While using TDD for UI development would be an overkill in most cases, you still need a reliable solution that allows you to automate your UI tests once your UI is stable. With Screenster, you can very quickly secure freshly-built UI with automated tests and manage changes effectively, giving UI developers a much needed safety net.

Doesn’t this seem like something that can benefit your TDD project? Leave a comment and tell us how you automate UI testing in your software development projects.